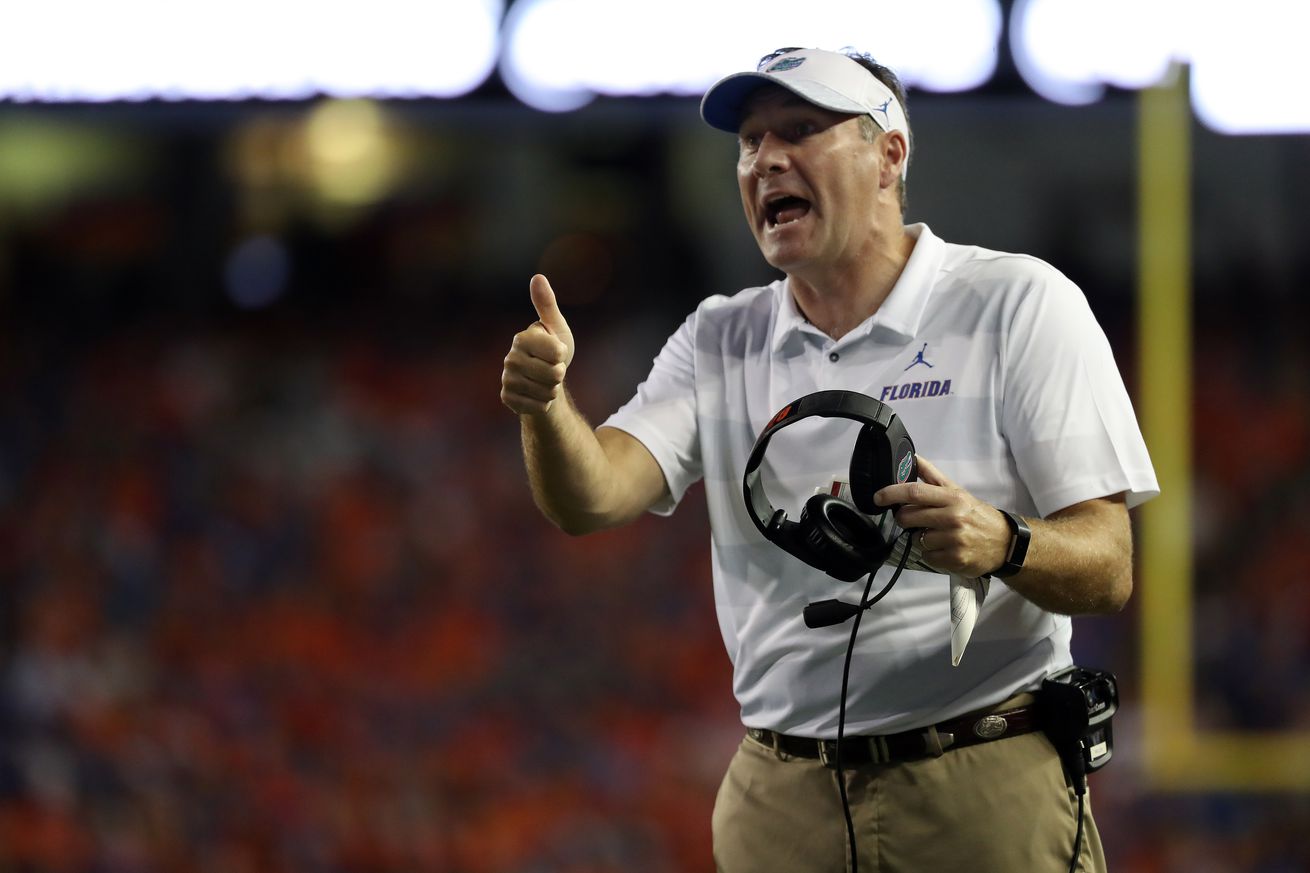 Nebraska, Michigan State, and a surprising name also join your tour of the most infuriated in college football internet.

Welcome back to THIS WEEK IN SCHADENFREUDE, your weekly chronicle of the most enraged, devastated, and conspiratorial in college football internet.

We will begin in the only place that would make sense following Week 2.

The Gators’ 31-game winning streak against their personal doormat ended. UK fans flipped a car and reportedly danced in their underwear in a puddle with a mannequin. A Florida running back announced his intent to transfer 35 minutes after the game ended.

Was Florida the victim of a refereeing conspiracy reminiscent of the 2003 “Swindle in the Swamp” against Florida State?

Why aren’t there lasers atop the goalposts?This was ruled a missed FG for Florida. pic.twitter.com/n6me6eIPqq

What was at play here? A poster floated one thought:

Swindle 1.0 was when FSU beat UF in Gainesville in ‘03, after a series of iffy calls went against the Chris Leak-quarterbacked Gators. Was there reffing conspiracy at work here, as well as then?

Yeah, I had that thought several times tonight. Watching a KY offensive lineman hugging a Gator player from behind — more than once — helped that thought. We clearly got the Bama crew tonight.

Yeah, it could be. Someone replied:

This was constant as well.

One person chalked it up to incompetence, not maliciousness:

The dumb zebra never looked up. He just saw the initial movement of the ball and made up his mind.

But someone then corrected that post to read more cuttingly:

The dumb zebra never looked up. He just saw the initial movement of the ball and made up his mind.

Tangentially, it wasn’t the first time this had happened:

A little off topic, but I recall a similar bad call on a Gator fg back in the 80s at Auburn. Lost that game also.

But how high did this plot go? Possibly above the SEC and all the way to the NCAA’s ref czars:

I want to know why Florida is constantly hosed by the refs at home??

Anyway, Kentucky had 12 penalties for 114 yards.

Potential conspiracies aside, it was a hard day.

Two games into the Dan Mullen era, this poster doesn’t see a light at the end of the tunnel:

I think it’s going to take four years of Mullen’s recruiting and conditioning before we start to see changes in this program.

This one has, uh, some scattered thoughts about the fanbase:

I felt like a plurality of the fan base in attendence (especially behind the Kentucky bench) did nothing to help us or really give the home field advantage, absent of those couple series following the Field Goal screwing. (At least we all thought it was, was it?)

Does anyone have any suggestions for educating the students on when make noise and why? Did anyone else have a similar observation tonight?

On an unrelated note. The mobile brick oven pizza being offered before the game by 19th and University was unreal. Those guys are the real deal.

And there’s this devastating conclusion:

This was worse than when Muschamp lost to Vanderbilt for the first time in 35 years.

It isn’t as bad as when we lost to Georgia Southern.

This is only the third worst loss in the last decade.

This Florida fan wants you to know he’s not like FSU’s coach, who recently suggested opposing players faked injuries against the Noles.

But he thinks Kentucky players faked injuries against UF:

Kentucky deserved to win, this is not an excuse, and I am not Willie Targgart

However, whenever Florida showed any spark on offense, made a big play or got into any type of groove, a Kentucky player would immediately hit the turf.

I don’t know how the NCAA could go about enforcing a rule change, but it was clear that there was something up with the timing of the injuries tonight.

But remember: He’s not Willie Targgart.

Lol we lost to Kentucky

Well when you lose to Kentucky there’s only one way to cope JUST TAKE EM https://t.co/EG7KMr3VVm

We lost to Kentucky dawg wow

LMAO WE LOST TO KENTUCKY Y’ALL

We lost to Kentucky at HOME unreal

I had a dream last night we lost to Kentucky

We fucking lost to the Kentucky Wildcats. IN FOOTBALL .

I found this video of every @FloridaGators fan born after 1986 watching the loss to @UKFootball pic.twitter.com/yx4Fc3zSAd

Bro we really lost to Kentucky

We deadass lost to them bum ass dudes in Kentucky…. WHAT THE FUCK?!?!?

We don’t know whether Florida is transitively better than Nicholls State right now. Which is cool.

Not even mushchamp lost to Kentucky. Jesus

I’m actually so happy I left UF so I don’t have to put up with the humiliation of a horrible recruitment office ever again. Jesus Christ. They lost to fucking Kentucky.

My man was like “we lost to Kentucky?? Fuck this I’m out”

It was nice knowing y’all pic.twitter.com/4JxqoRX1oo

And this person had a miserable experience at an ASU tailgate, which didn’t come close to living up to the lofty standard of event management set by MSU itself:

– nightmare entry, waited in long lines – no chillers in tents, hotter than effing ‘nam – VIP was full bullshit, $175 to cram into a dingy clubhouse, no way to sit – bar had 2 workers for 200+ peeps, line was often 50 deep – multiple hours before the game they ran out of fucking water, people were suffering, what a joke – basically a scam event, they made a bunch of money and offered shit – lesson learned: never attend a non-MSU sponsored event, they’re all money grabs. MSU puts on great events, usually for a hefty price.

Someone said something despicable about QB Brian Lewerke:

Lewerke is Hoyer with foot speed

And Hoyer sucked. Seriously quit forcing the ball like that.

Offensive line -15 pts. We should put a 50 gallon trash can at center with snapping ability and it would do a better job. 3rd down defense remains awful. Basically this team looks awful after two weeks.

Fortunately, by Sunday, this poster had found a silver lining to the weekend:

Could not find online, but Sparty displayed prominently in new Rocket Mortgage ad.

At Rivals’ Husker Board, this caused several posters to turn on their friends.

There are many dumb drunks as normal

i saw plenty of good today. Losing a game last week hurt but not a conf game. I am saw better d and we will get better. Chill

What a Bunch of Whiners

Everyone is looking to point fingers. Can’t you just relax and see how bright the future is?

coming out of the woodwork and historically, some of the filthiest animals on the planet.

On another note, here’s one diagnosis of what went wrong:

If we would have played Akron

We win this game.

I know I’ll hear a lot of the usual “it’s too soon in the season” and “MAC play hasn’t even started”, but I’ve been a die-hard supporter of the football program and I EXPECT us to compete against the power teams every year. There’s no reason that we can’t be like Boise State or better. We need to strive to be better and we shouldn’t settle for mediocracy.

Which lightweight shocked the MAC’s CMU and brought about such despair? The Big 12’s Kansas.